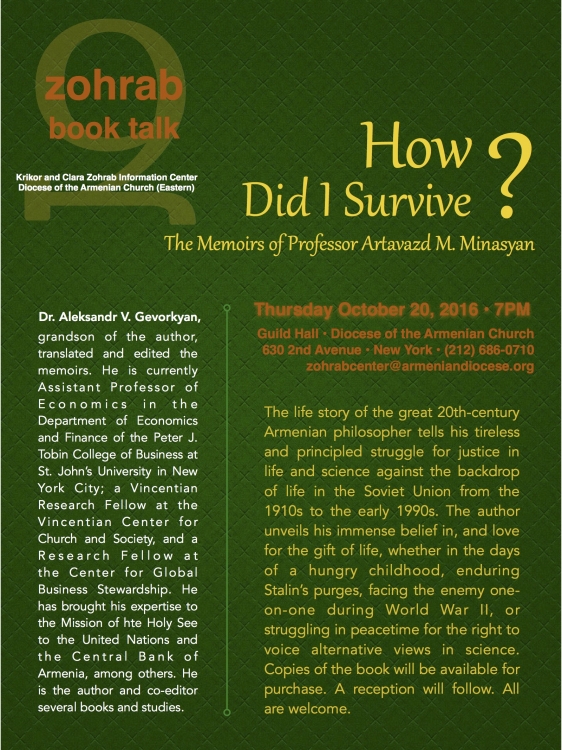 Book Presentation: "How Did I Survive?"

Dr. Aleksandr V. Gevorkyan will present the memoirs of his grandfather, the renowned Soviet Armenian philosopher, Professor Artavazd M. Minasyan (1913-1993) in the Guild Hall of the Armenian Diocese in New York on Thursday, October 20, 2016 at 7PM.

Entitled, How Did I Survive?, Professor Minasyan’s memoirs were translated into English and edited by Dr. Gevorkyan, who will present the book.

Professor Minasyan was one of the founders of the dialectic school of philosophy. He made immense contributions to the scientific content of philosophy through his numerous research articles, monographs, textbooks, and conference presentations.

The book tells the remarkable story of an intellectual  of the highest caliber, and the challenges, controversies, destruction and injustice posed by life in the Soviet Union. The author unveils intricate details of his time, describing his fight for survival and what inspired and gave him strength to go on from the days of his hungry childhood, Stalin’s purges, facing the enemy one-on-one during World War II, or struggling in peacetime for the right to voice alternative views in science.

The book presentation is open to the public and free of charge. Books will be available for sale during a reception that will follow the presentation.